The Quakes have seen promising talents move through their academy pipeline. From Cade Cowell to Tommy Thompson, academy players have gotten the chance to play for their home club. Now, one academy player stands to be the best the clubs ever had.

One of the only positive aspects of the Quakes has been their academy. With plenty of players moving through it, Cruz Medina stands to be the next great.

When MLS writers are already declaring you as part of the 2026 USMNT World Cup squad without playing a single MLS minute, the hype can only grow. Having trials at Bayern Munich can also continue the growing excitement. Medina has the ability and hype to be the best MLS product since Alphoso Davies.

Given Luchi’s track record with youth development, it is a possibility that Medina will be given his MLS debut next season. While he has proven nothing at the first team level, allowing him to bounce between the first team and Quakes 2 will contribute to his development. Another issue for Medina is that his position is filled, but there are so many players he could learn from.

Despite years of ineptitude at the MLS level, the Quakes’ academy has been one of the best across the league. A constant pipeline between the academy and first team has allowed for incredible talents like Medina to have a chance.

Since his debut with the San Francisco Glens academy, Medina has been a much hyped prospect in MLS circles. Given how quickly he has risen as a prospect, it’s hard to not share that excitement.

Like many other academy players, Medina did not start his development with the Quakes. The Glens are a lower division side that aims to develop the soccer culture in San Francisco. That was where Medina started his development.

After whispers grew to louder murmurs, the hype finally reached its peak when Grant Wahl, rest in peace, announced Medina was having a trial with Bayern Munich. This was a shock to so many, given that Bayern was offering a trial to a player who wasn’t even signed to an MLS team. Not only did it ripple around MLS circles, but local news covered this incredible development.

2022 became Medina’s breakout year, as he began seeing sustained success at multiple levels. With the youth USMNT, he was the star of the show, guiding the US to wins against Belgium and Portugal at the U17 UEFA development tournament. The MLS NEXT would give him more chances to showcase his potential against tougher opposition. 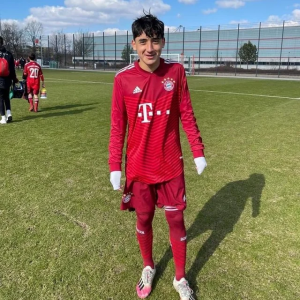 Although he wouldn’t get signed by Bayern, the Quakes would quickly offer Medina a contract. Handing out a 4 year contract to a 15 year old is wild, but it was a no brainer for a team that was determined to rebuild through their academy. Medina had been playing for the Quakes academy, but this contract was different, it was a sign that he was the future.

Medina’s quick rise from relative unknown to the future of the Quakes in the span of six months has been great to watch. Now, the stage is set for him to develop into the next MLS prospect to reach Europe.

Unfortunately for Medina, there is a logjam at every position that he can play on the first team. Luchi may still give him chances, but he may be bouncing between the first and second teams.

A natural winger or attacking midfielder, Medina thrives when he’s allowed to play between the lines. His creativity allows him to be almost positionless, if he has a striker to play under. Medina has also shown an eye for goal, but he remains at his best as a playmaker.

On any other team this skill set would make him a starting caliber player, but the Quakes have a lot of talented players. Cowell and Espinoza are all star level players, so it’s hard to envision Medina taking a spot on the wing over them. It’s even harder to envision him winning a spot in the attacking midfield spot, as the Quakes seldom play with one.

With all that being said, there will exist chances for him to develop. Be it with the first team or Quakes 2, there is a path forward for Medina in San Jose.

During his time with FC Dallas, Luchi made his name developing academy players into MLS stars. This should bode well for Medina where Luchi can help him fine tune aspects of his game to become a key player. Even just being in the first team training sessions will benefit Medina, as Luchi can show him what it takes to succeed in MLS.

Even when he may not be able to crack the first team rotation, the front office and MLS have found other avenues for youngsters to play. Quakes 2 is the revamp of the reserve league with a focus towards youngsters, giving them valuable minutes. This will be the best way to develop Medina while keeping him near the first team.

Over the past few years, the Quakes have seen their academy go from a dormant presence to one of the league’s elite. When everything else has failed with the team, the academy has been the bright spot in a sea of trash. Now Medina will have the chance to be the best product of an elite academy.