MLS free agency has a totally different vibe than the other major US sports. This free agency period is not a time when teams undergo dramatic chances. However, there are still some free agents who could help the Quakes.

With the Quakes changing the way they operate in the transfer market, there are some free agents who could help. There will likely be no movement until after the World Cup, but it’s never too early to start considering different options.

From needed depth to interesting starters, there are plenty of players available who could be useful to Luchi. The majority of the free agents that are available are MLS veterans. This is exactly the type of player the Quakes should aim for.

The free agency period will, hopefully, not be the only movement for the team. This period should serve as a way to fill out the edges of the roster. Filling out the roster with veterans who can contribute at every level is important to build a playoff team.

As the Quakes enter yet another rebuilding period, they need to nail these free agents. These free agents should provide some great depth pieces to the team.

A MLS veteran that has played on some contending sides who can play either full back position. This is the ideal bench player for the Quakes.

Valentin has suffered a decline over the past season, seeing his availability crater with his stats as well. He is no longer at the stage of his career where he can be an effective starter. However, he can still bring veteran leadership off the bench.

Besides Paul Marie, the Quakes lack a starting caliber backup fullback. Marie is a better player offensively than Valentin, but lacks the leadership. Valentin can bring immense MLS experience to a side that is heavy on youth.

More of a traditional fullback than a Dani Avles type, Valentin would be a great foil to Trauco or Akapo. Valentin has never been a prolific playmaker, but has decent enough passing stats.

While the Quakes defense has already been bolstered, they still need depth at the fullback position. If Tommy Thompson isn’t brought back, Valentin has to be the first name on the list.

Osorio has to be the best free agent available with the majority of the league eyeing him. Not only can he be impactful as a sub, Osorio can become a key starter for the Quakes.

A key player on Toronto’s best sides and a member of the Canadian national team, Osorio would be an excellent addition. Osorio is a decorated MLS player who could become an important player. Much like the Montiero signing, this would give the Quakes an all star level option in the middle.

For Toronto, Osorio was a prolific goalscorer who could also chip in the assists. One of the league’s better passers, he can bring up the ball and set up the offense. Given his experience at the top level, he can ease the pressure from the younger members of the midfield. 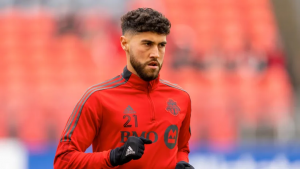 To be frank, Osorio has to be the Quakes’ top priority as he can be their star midfielder for years to come. Luchi would love his ability to play as a box to box number 8, giving the side another great midfield option. If the Quakes want to move away from Yueill, like last season, Osorio would be a perfect replacement.

Many sides will be battling for his signature, but the Quakes need to aim for Osorio. He would give the team another great midfield option.

This is definitely a pie in the sky option, and potentially unnecessary, but is a fun one nevertheless. Zardes may not be on the same level as Ebobisse, but is still an excellent player.

One of the best MLS strikers of his generation, Zardes is a winning player that could lift any offense. Not many players have a career that is as accomplished as Zardes’. A former all star, Zardes could command a hefty contract from any contender.

Zardes is still one of the league’s best options up top despite a slow decline over the past few seasons. At his best, Zardes is a deadly finisher who is reminiscent of Wondo, but with more physical tools. While he has always been a lethal poacher, Zardes has never been a great playmaker which could be covered up by the elite creative players on the Quakes.

Perhaps this slow decline could help convince him to move towards being a super sub. Given Ebobisse’s all star level play, the Quakes are more than solid at the striker position. However, having Zardes available off the bench would give the team the best striker tandem in the league.

It could definitely be a hard sell to Zardes, as he is still operating at a top level and could help any contender. However, if Luchi is able to get him to buy into being the super sub, it would do wonders for the depth of the team.

MLS free agency isn’t the circus that it is for every other major American sport, but is still crucial to building any side. The Quakes have a chance to fill out their roster with veterans who can contribute. While they are not the most glamorous of sides, the Quakes can offer players a chance to take part in an interesting project.