Being able to close games is the mark of any competent team, much less a contender, as this is the way games are won or lost. In baseball, relievers and closers help carry out a win and in basketball, there  are those guys who you just hand the ball to that will get you a bucket. For the past month or so, the Quakes have been unable to close out games and it has contributed to their utter collapse.

While this season was more or less lost in the offseason by not figuring out the situation with Almeyda, hope was renewed when Covelo was able to get the team to perform well. Since the beginning of July these good vibes are gone, as the team’s inability to handle games has undermined any progress.

Starting with the Toronto game, and excluding the Galaxy one, the Quakes have blown leads in five of those seven games. For the most part, these blown leads have occurred when the team is controlling the game, creating chances, but just seems to be unable to handle the pressure. Even in the game that they lost without leading, the Quakes had the best chances but couldn’t find the net.

In addition to those struggles, there is no one who is coming off the bench to rescue the side when the games get dicey. Cade Cowell and Shea Salinas should be the two off  the bench that could help the most, but Cade has regressed and Salinas has barely been healthy, negating any impact. Bouda could maybe help, but he has hardly played and Judson has been really the only positive bench piece.

There are many reasons why the Quakes have collapsed, from the coaching situation to the lack of quality starters in some positions, but this inability to close games merits some attention. It’s pretty clear that this season is over, but there needs to be a change in mindset for next season.

It’s striking to see how the team has been unable to find some sort of consistency this season, besides their inability to finish off games. Truly it’s difficult to find any singular reason when this has happened, perhaps it’s just a mixture of various factors or perhaps this franchise truly is cursed.

The game against Toronto is a really great marker of when the season fell out from under Covelo given the revival that Covelo had been able to foment. Before that game the Quakes still had a fighter’s chance of playoffs soccer, a 13% chance according to 538, but since then they have only won once. It’s also the first game where this trend of blown leads became more evident.

From the loss in Portland, where the Quakes have never won in MLS history, to the heart breaking collapse against RSL at the end of July, this trend has only continued. In a way this has ruined so many of the positives from this season, as there is nothing to show for them.

Saturday’s game against Austin FC laid bare so many of the issues that contribute to this phenomena. The Quakes went down early, but quickly found an equalizer and eventually the lead, with the team controlling the game and finding chances, it seemed like they were ready to get the win. A little while after the equalizer, Austin equalized and led going into the half with the Quakes being saved by Ebobisse at the death.

It seemed like the moment they went up a goal, the game completely flipped and instead of taking the game to Austin, the Quakes allowed Austin to carve them up. Simple mistakes were made, as the pressure overcame a lot of players and Austin pounced on that. Covelo was unable to  find a solution no matter who he threw onto the pitch and was bailed out by Ebobisse once more.

Even in the game they won, they managed to have a 3-0 lead at the half reduced to 3-2 and, at times, looked likely to concede yet again. The loss to Miami, another dumpster fire, revealed the team’s shaken mentality as soon as they conceded early, as they were unable to connect on any great chances  despite Miami giving them a lot of chances. In a way these two games are just as revealing as the others.

In a season of bitter disappointment, this past month has been its epitome, besides the terrible start to the season under Almeyda of course. It feels like there is no hope of fixing this issue until a permanent  manager is brought in and can instill a system over the course of an offseason.

In moments where the game could be won or lost, there are certain players that can step up and carry the team or can’t and allow the game to get away from them. Players that can define these moments can be found both in the starting lineup and on the bench.

To be fair to the team, there are a few players that have stepped up and delivered for the Quakes. Ebobisse has become the team’s best player and has gotten them through crucial moments, as has Espinoza and Marcinkowski who have both found their best form in a Quakes jersey. Even Benji has come up clutch with his never say die attitude and Monteiro never stops creating.

It’s outside of those players where things become more concerning, as leaders are tough to find in the rest of the team. Despite Nathan’s passion and Beason’s clinical work, there is no real leader in the  backline to organize themselves and react to attacks. In the midfield, there are similar struggles with the pressure getting to players like Yueill and zapping a lot of creativity from them.

A correct move off the bench can work wonders for a struggling team, but the Quakes have yet to find productivity off the bench. No matter if Covelo throws on wingers or midfielders, there is always a feeling that it was never the right choice.

Be it Cade or Jack Skahan, none of the combinations that have been  thrown out have worked and this has yielded some worrying signs. Cade seems to have completely regressed coming off the bench, as he has yet to fix the areas he has struggled with for so long, namely his decision making. Salinas, a Quakes icon, should have provided that veteran knowledge and guided the team through tough moments, but has barely played due to injury so far this season. 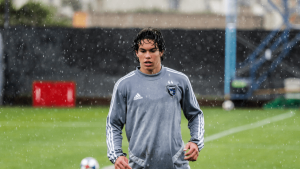 Perhaps this means that it’s time to give the youngsters the reins, as there is nothing left to really play for and hope that a baptism of fire can help them grow. Niko Tsakiris is a truly exciting prospect and could gain the necessary experience by coming in and giving the team another option in these moments. Bouda is in the same situation and could give the team another option on the wing when one of Benji and Espinoza needs to come off.

A perfect storm has hit the team this season and it has ruined a lot of the good progress made by the side. From the lack of leadership in certain areas to worrying signs on the bench, so much has combined to derail Covelo’s revival.

It shouldn’t shock fans that the Quakes aren’t displaying any signs of a competent team, but the constant blown leads have let fans down even more than they could have believed. A lot of the issues that have plagued the Quakes this season revolve around the lack of direction from the top since 2012. This offseason will be monumental for so many reasons, but at a minimum, a change in mindset is desperately needed.