As the season continues to drag on, the Earthquakes are likely looking towards next season with playoffs looking less and less likely. With Almeyda’s departure more than a month ago, the team has yet to find their next long term manager. This process will likely take the rest of the season with no decision in sight, but the question is how will Covelo’s future with the side look like?

Covelo’s start to life in the MLS was a welcome sight for Quakes fans, as he had the side playing their best soccer in years. While the honeymoon is starting to come to its end, his future with the Quakes is still unclear.

Having been involved heavily in the Quakes’ academy, Covelo understands player development and certain players have taken steps under him. In addition, he has updated his style of play to fit that of the MLS in order to properly match other teams. This has in turn resulted in certain players excelling and the Quakes going on a nice run of form.

While Covelo’s tenure has been a great change of pace for fans, there are still question marks about his long term fit with the side. The results the past few weeks seem to show a team in a rut, although not the most concerning one. His inexperience at the first team level  is still a concern and perhaps leading the academy teams may be the best solution for him.

With the search for the next head coach well underway, Covelo deserves a chance at the job, but there will still likely be a place for him at the club no matter what. It feels like this sort of moment that happens every few seasons with this team where the next managerial appointment is just so important.

Since Almeyda’s dismissal, Covelo has taken a team that was dead in the water and made them a more enjoyable winning side. At the same time, players like Ebobisse and Espinoza have played their best soccer under Covelo.

Almeyda’s tactics were out of place in the MLS and teams could just tear apart the man marking system implemented. One of the first things Covelo did was more or less abandon that scheming and move to a less intensive system. While the Quakes are still leaking goals, the team isn’t being torn apart and rather a lot of the issues come from individual errors.

Offensively, the side has changed a lot with the team being more possession driven with more emphasis being placed on Monteiro and Espinoza as the two playmakers. This has given other players more freedom to contribute on all levels. No more are players forced into more rigid roles, but everyone has a chance at getting forward and finishing play.

In turn, this has allowed for certain players to excel and play their next soccer in a Quakes shirt. New transfers Monteiro and Greguš have adapted well to life with both players being among the best assist providers in the league. 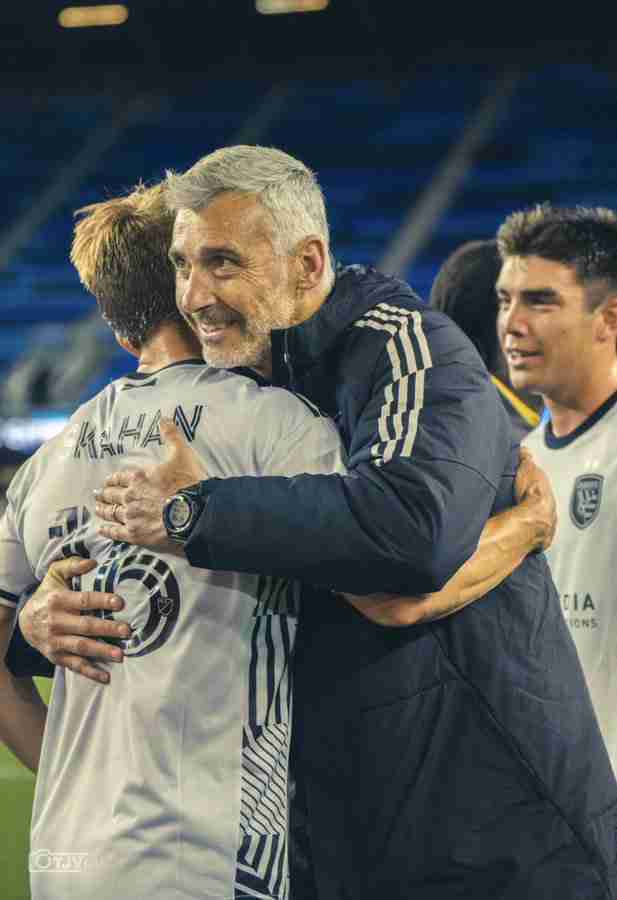 However, the two players that have benefited the most from the managerial change are Ebobisse and Espinoza. Ebobisse is on pace to challenge for the golden boot and deserves to be an all star with the Timbers looking foolish for trading him away. Espinoza is creating chances at an elite level and playing his best soccer since his first season in the MLS.

Clearly Covelo deserves his flowers for fixing this team after the failure of the Almeyda years, as the side is almost unrecognizable to the one that was stuck at the bottom of the MLS. For that reason, he does deserve consideration for the full time role. A

Covelo has helped Quakes fans move away from the pit of despair and given them the most dangerous thing, hope. In all seriousness, Covelo has earned his shot at the full time job and will hopefully remain part of the team in the future.

With all the positives, there are still questions regarding whether he is the correct choice for the team full time. There are more interesting options out there and he may be better suited to helping player development in the youth systems.

One of the best developments for MLS fans has been the rise in the quality of managers in the league, as some have gone on to enjoy success in Europe. This means that the front office has no excuse for not finding the proper successor. There are both managers in the USL and assistant managers in the MLS who could step up and lead the Quakes.

USL managerial prospects might be led by Landon Donovan who has created a very interesting side in San Diego that has a blistering hot offense. On the assistant manager front there’s, of course, Ian Russell who has already proven himself in the USL with Reno.

Covelo’s biggest strength is his experience with youth teams and developing players. One can see that in the trust he has in his younger players by including them in the matchday squad. Giving Covelo a chance at running the academy might allow him to implement first team tactics into the youth system.

Perhaps moving him to an assistant coach role where he could continue to get exposure to MLS play could benefit both parties. This may help Covelo become more prepared to take over the squad in a few years after and create a smooth transition of power. Coaches like Seattle’s Brian Schmetzer moved from assistant to manager after spending years learning from other coaches.

MLS has changed a lot in the past five years, as the league has attracted better players and managers. In both departments, the Quakes have been lagging behind the rest of the league for quite some time. That’s why finding the perfect manager is so important to ensure that the team will no longer go through these periods of chaos and failure.